Most houses and building these days have gutters on them, and most of us give them little to no thought on a daily basis. The only time they come to mind is in the fall when they need cleaned or when we have failed to clean them out and they get plugged up and overflow. Not having gutters can cause huge issues for your house or barn, rotting soffits, foundation issues, moldy walls, the list goes on and on. Have you even given thought to the impact that the runoff has on the soil below the roofline?

Rain drops can hit the ground at twenty miles an hour, dislodging soil, especially when there is no ground cover. This soil can splash soil up to five feet horizontally and two feet vertically. This is the start to erosion. Once that soil has been dislodged it is much easier to be transported across the soil surface. This is the beginning stage of soil erosion, which causes an estimated $27 billion in economic losses every year in the United States.

Gutters on roofs catch the water and prevent it from hammering down onto the soil when it drops off the roofs. Ideally the gutters are attached to downspouts which funnel the water down from roof level to ground level and releases the water to a hardened outlet where erosion is limited. This can be onto a grassed lawn, into a storm drain, into a rock lined channel or into a rain garden.

Ideally when we discharge these downspouts they go into area that will hold water and slowly discharge them like small versions of the storm water ponds we see on large developments. This reduces the amount of water hitting streams and rivers immediately after a storm and also provides an opportunity for the water to be filtered by the soils as it slowly drains through them, eventually rejoining groundwater far below the surface.

At my house when I purchased the property the barn that was in place, a twenty eight by thirty foot single slope roof had no gutters on it. This had led to an approximately three foot wide and two feet ditch running behind the barn, which unfortunately had nowhere to drain. So not only did I have the water rotting out the bottom boards but the drainage problem also left a large pool of water which became a breeding ground for mosquitos during the summer season. When I replaced the barn roof several years after we moved in I added gutters to barn, removing the majority of the water supply and the erosion issues, but still just had the downspout emptying onto the ground. A little while later I added a chicken coop next to the barn and again added gutters. Once this happened I dug a trench and routed both downspouts out into the pasture to an area that already held water. This allows the water to slowly filter down into the soil. The erosion factor has been eliminated and over time as I had soil available I filled in the ditch removing a space where mosquitos would breed.

The next time you walk outside and see gutters, take into account the amount of good they do not only for your house but assist in the conservation of natural resources whether you live in a condo, a small home on a quarter acre in town or a 1,000 acre farm out in the country. 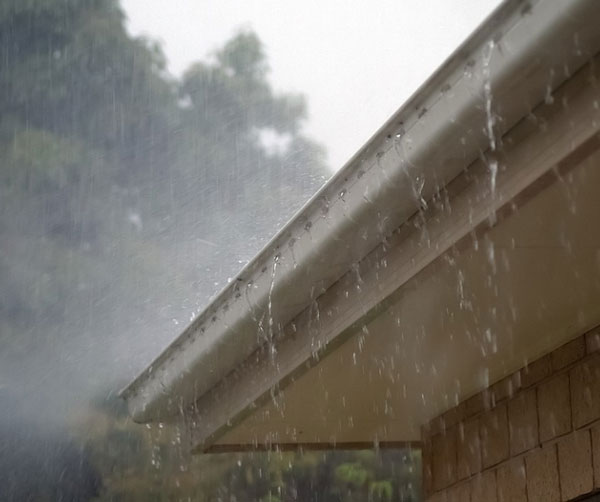