Some of my earliest memories are of helping my Grandma in her garden. She lived beside us and because she was very crippled from arthritis, we grandkids were her labor force when it came to gardening. She would instruct us on what, where and when to plant and then harvest the bounty of vegetables. Of course we benefited from all this because she was a widow with a huge garden!

When it came to gardening, I don’t know if Grandma followed an almanac or not. I do remember she followed the moon and was picky about where and when things were planted. For instance, potatoes had to be planted in the dark of the moon. Tomatoes had to be planted in the light of the moon. Crops had to be rotated and there were other instructions I thought were odd at the time. As a kid, I had no idea what most of it meant.

This past week’s “super moon” got me to thinking about the moon and its effects on the earth, so I did a little research on the moon and gardening. For example, not only does the moon’s 28-day journey around the earth affect the tides it also affects the earth’s water table. During the new moon to the full moon (called the waxing moon or the light of the moon) the gravitational pull brings more water to the topsoil. So plants and seeds absorb more water during this time. This is a good time to plant above-ground crops like cabbage, beans, and tomatoes. The gravitational pull during this time also causes sap to rise. Fruits harvested during this phase will be at their juiciest.

The period from the full moon to the new moon is called the waning period, or the dark of the moon. The water table falls at this time, reducing the pressure on root systems. It is also considered the best time to kill weeds, turn soil, and plant below-ground crops, such as carrots, potatoes, and turnips. Grandma always wanted her potatoes planted in the dark of the moon because if you planted your potatoes in the light of the moon, they grew up instead of down and you ended up with a bunch of small, sun-burnt potatoes.

If you’re interested in following the moon, as farmers have done for centuries before Doppler radar on television, there are several almanacs still in print, plus at least one offers a smart phone app. All the almanacs list the same basic information, but often in different formats. The almanac usually interprets the information so that you can easily pick out the most favorable time to plant certain things. Many almanacs also link moon phases with astronomical (not astrological) positioning. Knowing when the moon passes through the astronomical constellations is a helpful indicator of when to perform activities such as fertilizing, weeding, harvesting, watering, etc.

Whether you follow the moon or not to garden, I hope you at least think of the moon a little differently the next time you glance at the sky! 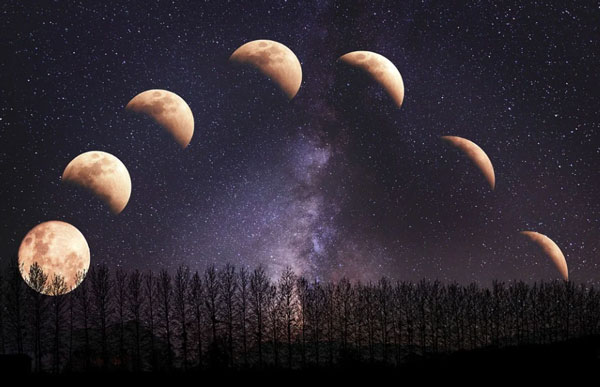