In the natural resource world it seems like at least once a month there is news coming out about a new invasive species that is affecting some different area, whether it is forests, pastures, crop field or just your back yard. Typically control of these invaders falls to a landowner who knows what to look for and what to do. This is because these non-native species didn’t evolve in our ecosystems and therefore have no none predators in the United States. There are native fungus that are attacking some of these invaders and providing some relief. The two primary species that we are seeing these natives doing control are in Ailanthus and multiflora rose.

The disease that is attacking multiflora rose is a blessing to some and a curse to others. Multiflora rose was introduced into the 1700’s, and was heavily planted in the mid 1900’s as living fences and to reduce erosion on sites that would grow very little else. To most rural landowner with large populations of multiflora rose it is a blessing reducing the populations of this pest which can take over large areas of pasture and forest. For urban landowners who may be downwind of multiflora rose it can be a real issue especially if they have roses in their landscaping, because it attacks ornamental roses as well as multiflora rose. Although many times with the reduction of the canopy over, other invasive species can move in so it is not a time to reduce vigilance. The void left can be filled by honeysuckle and autumn olive, neither of which are desirable.

The invasive that is at or close to the top of biggest problems in the woods is Ailanthus or Tree of Heaven. This tree was originally introduced into Pennsylvania in the late 1700’s. It has spread across the majority of the continental US both through natural seed movement and human planting of this species. In 2002 Ailanthus Wilt, a native fungus which attacks and kills Ailanthus was found in Pennsylvania. In 2012 it was found in Pike County, with this discovery United States Forest Service was able to start doing in the field testing. Results for this testing has been very promising with several test plots including two here in Muskingum County. This wilt attacks the vascular system of the trees and begin to wilt them within 4 weeks of inoculation- and death follows within 10 weeks of inoculation. This wilt unlike most commercial control methods does not require follow up and do not leave small seedling to come up and replace the killed larger trees.

The battle against invasive species will continue, likely forever. Combining these native fungus with native beetles and control applied by landowners can greatly reduce the invasive species throughout our landscape giving a better opportunity to our native species. The native species are evolved to grow in this area, as well as evolving with the native animals which provide benefits for both the animals and the plants. Pollinators especially benefit from native species over exotic ones. Controlling invasive issues whether it be through encouraging these native diseases or through chemical control can have long standing benefits for forests, pasture and crop land. 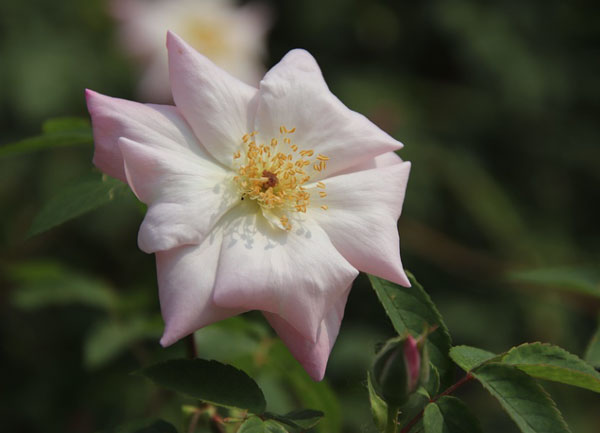