The Praying Mantis: Creepy or Fascinating

Do not judge me, but if I were writing a description of the Praying Mantis, it would go like this – a creepy, alien looking bug that needs to say its prayers. However, now that I am a member of the Soil and Water family, this description will not fly. I had to learn more about this fascinating, but creepy looking insect.

What I found is the Praying Mantis belongs to the Manidae family, and there are over 2400 species. The word “mantis” originates from the Greek word Mantikos which means prophet. This name was given because of the way the Praying Mantis holds its front legs in a praying like position. The Praying Mantis habitat is usually tropical or subtropical, and it can be found worldwide. The Praying Mantis is also a close relative of the cockroach and the termite. I knew there was something about it that creeped me out.

Praying Mantis are usually green or brown in color and come in a variety of sizes, depending on the species. They rely on using their surroundings to camouflage themselves from their predators. The Praying Mantis has the same parts as most insects, such as body, legs, wings, and head. However, the uniqueness of the Praying Mantis is its triangular shaped head, which can turn 180 degrees. Most insects’ heads are fixed and do not move. Another unique feature is the large eyes that are on each side of the head and allow for very sharp eyesight that can detect the slightest movement. The Praying Mantis has very good hearing and has special sensors that allow it to hear its most deadly predator, the bat. Praying Mantis have leather-like wings, but most of the females cannot fly.

The Praying Mantis is not spared from its own predators. As I mentioned, the bat is its biggest threat. I read that the Praying Mantis, while flying, can hear a bat coming from a distance and will immediately seek cover. They will stop flying and drop directly to the ground. Camouflage is the Praying Mantis strategy against threats. Each species is naturally camouflaged for its environment.

The Praying Mantis life cycle has three stages: egg, nymph, and adult. This is called an incomplete metamorphosis because there is no pupa stage. The Praying Mantis nymph will hatch to look like an adult but smaller. The fertilized female Praying Mantis will lay its eggs in a foam like substance, which will harden very quickly. This is called an ootheca or egg casing. The female Praying Mantis can lay as many as 400 eggs in this casing. She will then attach the casing to a branch, and the egg filled casing will remain there over winter. The nymphs will hatch in the spring as the weather gets warmer. Most nymphs do not survive more than a few seconds, because of what I mentioned earlier – they have to watch out for that hungry sibling. Those that survive will go through several molting stages before they become adults, and the process begins again. There is one generation a year.

Even though I still find this a creepy looking insect, it is a wonder of nature that is so fascinating. The world is full of so many fascinating things, and I am blessed to have the opportunity to learn about them. So, please continue to stop by the office with your fascinating discoveries, because this newbie is interested in what you find. Like I have said before, if we do not have the answer, we will certainly try to find it. 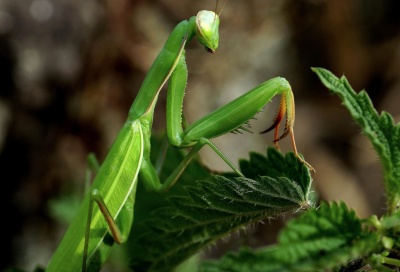