Tree seedling pick-up will be Thursday, April 14, 2022 from 7:30 a.m. to 5:30 p.m. in the Shinnick Street parking lot, on the south side of our building. Signs will be posted, please enter the lot from Shinnick Street. Emails have been sent so please print and bring your email; we apologize that there was not enough time to send postcards. Please, no early pick-ups! We are not responsible for the condition of tree seedlings not picked up on Thursday, April 14. 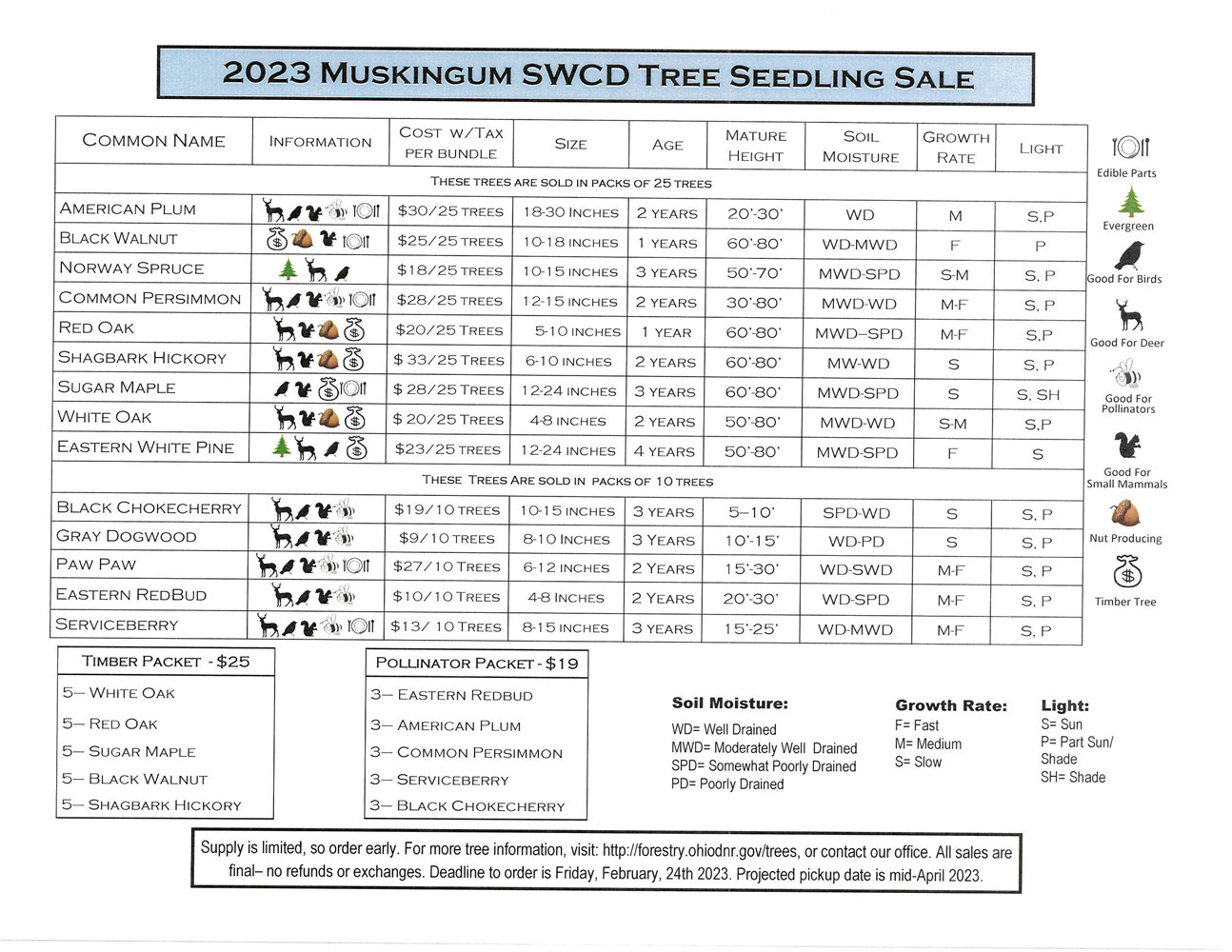 Tree Shelters - Are They Worth The Cost?

The Muskingum SWCD has been selling tree shelters for many years. To provide a good comparison of sheltered versus non-sheltered trees, we asked several past tree shelter customers why they continue to use shelters year after year.

One farmer that we visited has been planting trees since he purchased the property in 2015. As time has gone on he has increased the percentage of sheltered trees. He sees multiple benefits from using the shelters including what is likely the most important-protection from the deer. Small twigs are high in nutrients throughout the year, which makes these desira-ble snacks for the deer, especially in late winter. The shelters also discourage the bucks from rubbing the trees. In addition to deer protection, the shelters also increase growth significantly.

In the spring of 2018 American Plum were planted in several areas of the farm, and in just one growing season those that were sheltered have outperformed the unsheltered ones by at least a four to one ratio. The faster the trees grow the quicker they will produce mast for wildlife feed. There has also been a significant reduction in damage caused by moles, voles, mice and rabbits. While these small animals typically won’t eat the tree, they will strip the bark to eat, which in turn essentially strangles the trees.

This landowner in particular has seen, and continues to see, the value in tree shelters. In addition to increased growth rates, deer protection, and other animal protection, shelters have also greatly reduced the labor needed to control weeds around his trees. He is able to spray the weeds and reduce competition with much less concern of any herbicide getting on the trees due to the shelter. To decrease the time period to maturity you can either spend $50 plus on a 3/4” caliper tree and then have to plant a large ball or you can buy a $2 seedling and protect it with a $10 shelter and have the same result in the next five years. If you have any questions regarding the benefits of tree shelters please contact the office at (740) 454-2027.