I live pretty far from most civilization. Fairly common around here, it’s where the gravel road meets the dirt road and then you drive a little further. The kind of place where you go to sleep with the sounds of bullfrogs and crickets and the sound of cars is disruptive. A month or two ago, I had a delivery to my house and when the city boys delivering my order got out of their truck, it was dark and quiet and I chuckled to myself as I heard one of them say “Man, I ain’t ever been anywhere this dark before.”

When I moved to my home, one of the first calls I made was to the power company. I told them to head on out and remove the giant light at the top of the electric pole near the driveway. I didn’t need it. They were shocked but I was resolute. We also removed the motion lights and we made sure we didn’t leave any lights on at night. I hate nighttime light because it blocks the view of the stars and more importantly, we didn’t have any fireflies. What? What is that about fireflies? Well, there were so many nighttime lights around our house, we couldn’t see the stars and we didn’t have any fireflies. There are lots of perks living where there are real roads and if I’m giving them up, well let’s just say that I’m going to, at the very least, need some stars.

Fireflies are dramatically affected by ALAN (or artificial light at night) and recent studies show that our North American firefly populations are under threat. ALAN severely affects the reproduction and communication of North American Firefly species and may be one of the leading causes of their decline (along with a loss of habitat). ALAN is classified into three distinct types.

• Skyglow-the glowing haze you see over urban areas.
• Light trespass- light at ground level spreading beyond its intended area. This occurs when you have outside lights that spread far beyond the pathway you are attempting to light.
• Glare- this is the excessive lighting you have from large or high wattage fixtures (my power pole light is a perfect example).
• These lights affect more than just the fireflies. They disrupt the life cycles of nocturnal animals, amphibians, birds and other insects. In Florida alone, it is calculated that millions of sea turtle hatchlings die annually as a direct result of light pollution. ALAN affects their ability to find the nighttime horizon to reach the sea. There are significant questions about what nighttime light does to the human circadian rhythm as well. Light pollution has significant consequences to the plants and animals around us and there are so many easy ways to help.
• Turn out the lights. One of the things that I noticed after I turned the lights out was how much easier it became to see in the dark. Your eyes quickly adjust to the lack of artificial light and a full moon can quickly seem like daylight.
• If you must have light for safety, install motion sensing lights. These will come on as needed but quickly go off, leaving the area dark unless the light is necessary.
• Use timers to shut off lights, instead of leaving them on all the time.
• Use the absolute minimum wattage necessary.
• If you must use lights, make sure the lights point to the ground and use shields to prevent the light from shining into the night sky.

Some non-lighting ways to help the fireflies? Fireflies need rotten wood to lay their eggs and give their larvae a place to grow. They live in leaf and forest litter, so make sure that in your zealous attempts to tidy your yard, you’re leaving (no pun intended) good habitat for fireflies and butterflies. Fireflies need the same uninterrupted space as most insects, so attempting to leave their spaces undisturbed is the best way to create firefly habitat.

Oh, and my fireflies? I’m thrilled to say that one evening, last summer (more than six years after shutting off the lights), I went out to drink a cup of tea and listen to the bullfrogs before going to bed on a balmy summer night and my backyard looked like a million flashbulbs were lighting the night sky. There were more fireflies than stars. It was magical. 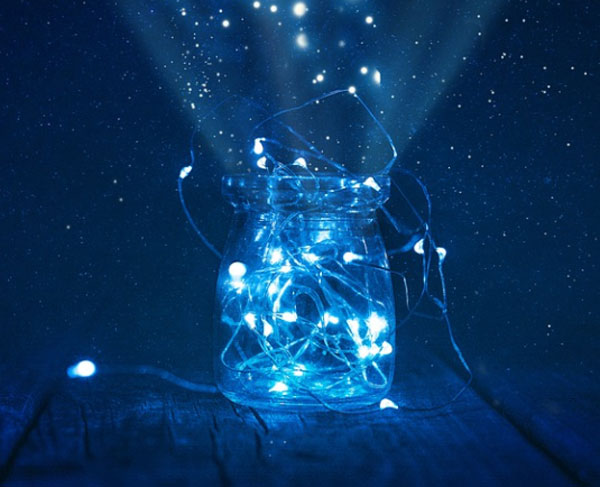