I recently had the opportunity to visit a robotic dairy farm. This was an amazing experience. I am not familiar with the working of a regular dairy farm, so I could not totally appreciate what this means to the dairy farmer. However, it was extremely fascinating to this persistently learning urbanite.

The first thing I noticed when I neared the barn was there was little smell. The cows were clean and there were few flies. The owner of the farm explained that the absence of flies was due to the fans in the building, and the control of waste in the barn.

The cows have freedom to wander in the cow alley or bed down in a free stall. The design of the stalls allows the cow waste to be deposited in the alley rather than in the stall. This keeps the cow waste out of the sand bedding and off the cow. The cow alley runs through the center of the stalls and is designed to remove waste from the area. The computer is set for a specific time to flush water through the alley, which carries the waste away. The alley floor slopes gently to allow the water to flow to the other end of the barn, taking all the waste with it. This water is directed to several pond reservoirs. This is where the water is stored and recycled to use again. The sand that is carried away with the water is left behind in an area that was designed to allow the water to flow but the sand will stay. The sand is then moved to the “beach” to dry and will be used again. The cows are sprayed with water often and dried with fans. This keeps them clean and cool. The cows have a daily foot bath, which cuts down on disease of the hooves.

The computer that operates the robotic milking machine is powerful. This computer will keep track of every cow’s specific information, such as first milking, how many times a day it milks, where the teats are located on the udder and so much more. It will even detect if the cow is in heat and ready to breed. Each cow wears a neck band that has a transponder, which holds information unique to it, and an easy-to-read number on the ears. The neck band is what the computer uses to identify the cow. The farmer enters the initial identification information into the computer and the software does the rest. The owner shared that they only use half the capability of the computer system.

I was able to see this robot in action. It was fascinating that the cows would line up to use the robotic milking machine. I was told that the cows learn quickly what to do to relieve the discomfort of a full udder. The process starts as the cow enters the milking stall. The computer will scan the neck band and will determine if the cow is ready to milk. Feed pellets are dispensed based on the cow’s nutritional needs. More feed is dropped for cows that produce more milk. While the cow is eating, the robot scans the udder, washes the teats and udder, locates the teats, and fastens the teat cups to the teats and proceeds to extract the milk. As it milks, the computer screen will show the milk production for each teat. Three to five gallons of milk is usually collected per visit. Some cows will milk three to four times a day. Once the milking is completed, the teat cups will detach, the udder is cleaned, and the cow is released to the barn. The robotic milking system will analyze the milk for disease such as mastitis. It can also detect if the cow is in heat. If the cow is sick or in heat, the robotic system will direct the cow to the right location to be treated or inseminated. This is done by a gating system guided by the computer. The computer will contact the farmer by text or email regarding any problems the cow or the system may have.

The robotic milking machine gives the cow the freedom to be milked when the cow feels the need. It also frees the farmer’s time. It allows the farmer to use his time on the other remaining farm duties and the cow to be milked when it feels the need. Like I said, I do not have history to compare the robotic system with, but I do feel that this robotic milking equipment can be a benefit to the cow and the farmer. 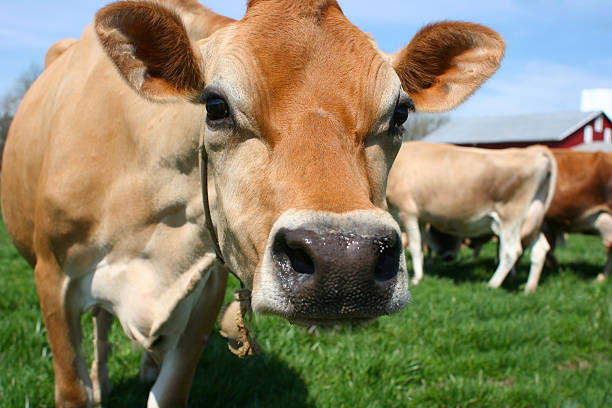